If the boulders are moved,
Even a river will change its flow.

Except for occasional flooding, the mightiest river keeps to its bed. It flows where it finds openings between cliffs and rocks. If the river is dammed, if the cliff walls are moved, if the boulders are shifted, it will flow a different course. It could even be made to flow backwards if the earth moved far enough.

Life is the flow of energy. It is the air that we breathe, the force that moves the weather, the force of all minds combined. It keeps the rivers flowing, our hearts beating, and the sky blue. This flow of energy moves constantly according to the fixed points that exist at any given moment. Therefore, by manipulating the cardinal points of our lives, we can change the flow. The freedom to choose and to change belongs to us.

Tao is the hidden secret source of all life.
Good men recognize that Tao provides for them
and therefore they esteem it.
Bad men don't recognize this,
but the Tao doesn't stop providing for them.

Beautiful words win some men honours;
good deeds buy others acclaim.
But the Tao values everyone,
not just those who excel.
What's the sense in discarding anyone?

Thus, on the day a new king is crowned
or powerful ministers installed,
while others rush forward with gifts and praises,
just be still and offer Tao.

Why have sages prized Tao for so long?
Because with Tao, he who seeks finds,
and he who has flaws is forgiven.
This is why it is the treasure of the world.

The Tao is the center of the universe,
the good man's treasure,
the bad man's refuge.

Honors can be bought with fine words,
respect can be won with good deeds;
but the Tao is beyond all value,
and no one can achieve it.

Thus, when a new leader is chosen,
don't offer to help him
with your wealth or your expertise.
Offer instead
to teach him about the Tao.

Why did the ancient Masters esteem the Tao?
Because, being one with the Tao,
when you seek, you find;
and when you make a mistake, you are forgiven.
That is why everybody loves it.

photo by lisbeth west
spring bells
Posted by lisbethwest at 6:08 PM No comments: Links to this post 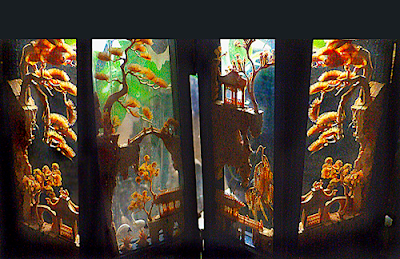 An unfortunate one is a rootless ghost,
His walk a mad angel's gait.
Insolent steps of one thrown from heaven
To toil in red dust,
As if he had not had enough
In a thousand previous lifetimes.
Where is his heart? Where is his soul?
To call this heaven's will
Is a cheap answer.

There was once a god who committed a crime. His punishment was to be thrown back to earth to suffer the misfortunes of being human.

When you see those less fortunate than yourself, whether they are the homeless on the streets or simply the ugly and unpopular, can you be sure that they are not like that god flung back to this mad planet?

Is their misfortune their own fault? Or do you explain with references to morality, destiny, reincarnation, and cosmic justice? Even the words of saints offer no relief for their suffering, so it hardly seems fair to blame them.

Let us not hold ourselves above our fellow human beings, no matter how great the disparity. To withhold your scorn is already beautiful. To see how we are all of one family is compassion.

Because he doesn't struggle
no one can struggle against him

A great country is like a low-lying land
into which many streams flow.
It draws powerful energies to it
as a receptive woman draws an eager man.
The feminine can always conquer the masculine
by yielding and taking the lower position.
In this way she becomes as low-lying land:
in time, everything comes her way.

Both accomplish their ends by yielding.

When a country obtains great power,
it becomes like the sea:
all streams run downward into it.
The more powerful it grows,
the greater the need for humility.
Humility means trusting the Tao,
thus never needing to be defensive.

A great nation is like a great man:
When he makes a mistake, he realizes it.
Having realized it, he admits it.
Having admitted it, he corrects it.
He considers those who point out his faults
as his most benevolent teachers.
He thinks of his enemy
as the shadow that he himself casts.

If a nation is centered in the Tao,
if it nourishes its own people
and doesn't meddle in the affairs of others,
it will be a light to all nations in the world.

photo "Gong Hoi Fat Chey"
by lisbeth west
Posted by lisbethwest at 1:23 PM No comments: Links to this post

Imagine a sculpture
You work on every day.
If you stop, the beauty
Will slowly go away.


What if you were at work on a beautiful sculpture but your material reverted or decayed if you ever ceased to progress? This is the unfortunate nature of spiritual efforts.

You can never stop trying to purify yourself, improve yourself, strengthen yourself, and cultivate the sacred that is inside you. If you do well one day, that is good. But if you cease your efforts, you will slide backwards. That is why you must strive on every level, from the physical to the mental to the spiritual. Your vigilance must never flag. Your determination must never waver.

Paradoxically, there is nothing to achieve. It is only our minds that convince ourselves that we must do something. We are already pure, already sacred. But we live in a polluted world, we have egotistical thoughts that constantly divide us from the true Tao, and we cannot remain forever in a pure state and still function in the world. If you attained the higher levels of Tao, you would appear to an outsider as if in a trance, and it would be impossible to interact with others. So if you are trying to be spiritual in today's world, you must never cease striving to keep yourself pure. Once you are not with Tao, you must constantly struggle with the impurity of the world.

Ruling a great state is like cooking a small fish
When you govern the world with the Tao
spirits display no powers
Not that they don't have power,
But their power will not harm people.
Inasmuch as none of them harms anybody,
Therefore virtue belongs to them both.

Governing a large country is like cooking a small fish.
If it's done in accordance with Tao,
nothing bad will happen.

Guide the world with Tao,
and evil won't be a problem.
Not that it won't be around,
but it won't find an opening,
it can't harm anyone.

The sage doesn't harm anyone, either.
When there's no harm on this side,
no harm on that,
goodness flows back and forth like water.

Governing a large country
is like frying a small fish.
You spoil it with too much poking.

Center your country in the Tao
and evil will have no power.
Not that it isn't there,
but you'll be able to step out of its way.

Give evil nothing to oppose
and it will disappear by itself.

—STEPHEN MITCHELL
Posted by lisbethwest at 10:14 AM No comments: Links to this post